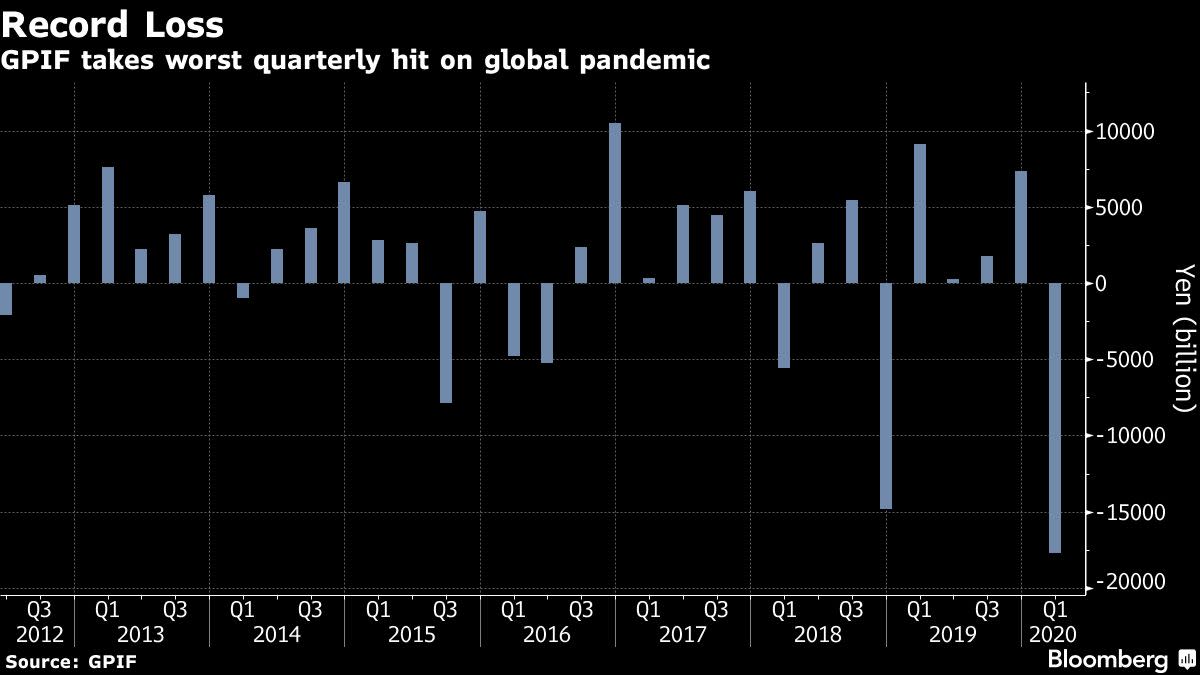 (Bloomberg) — The world’s biggest pension fund posted a record loss in the first three months of 2020 after the coronavirus pandemic sparked a global market rout in the period.

Japan’s Government Pension Investment Fund lost 11%, or 17.7 trillion yen ($164.7 billion), in the three months ended March, it said in Tokyo on Friday. The decline in value was the steepest based on comparable data back to April 2008, reducing the fund’s total assets to 150.63 trillion yen. Foreign stocks were the worst performing investment, followed by domestic equities.

The results come just months after the fund revamped top management and revised its asset allocation to focus more on overseas debt. The loss, which wiped out gains for the fiscal year, may attract political attention as social security remains a major concern for tens of millions of Japan’s retirees.

“The decline in domestic and foreign equities led to a negative return for the fiscal year,” said Masataka Miyazono, the president of GPIF. “Both equity markets performed strongly during 2019 even under pressures from the U.S.-China trade negotiations. The global coronavirus pandemic led to investors taking a risk-off stance.”

Overseas bonds were the only major asset to generate a positive quarterly return. The securities gained 0.5%, compared with losses of 0.5% for domestic bonds, 18% for local equities and 22% for foreign stocks. In April, GPIF raised its asset allocation to foreign bonds by 10 percentage points to 25%, while keeping the target for foreign and domestic stocks unchanged at 25%.

Naoki Fujiwara, the chief fund manager at Shinkin Asset Management Co., said the losses were expected. Equities have rebounded since March, so the pension fund should be recouping losses for the April-June period, Fujiwara said.“The current portfolio is exposed to equity volatility,” he said. “We’re in a low-yield environment right now, and will likely be for the next two years, so maybe it’s alright for now, but in the long run, the pension fund should correct the allocation of equities.”

Under the new guidance of GPIF President Miyazono and Chief Investment Officer Eiji Ueda, the fund must navigate a volatile market torn between an ongoing coronavirus pandemic and promises of economic stimulus measures. Fears of a second wave of outbreak are already hampering the global equity markets recovery.

The GPIF isn’t rushing to buy foreign bonds, which are 3% below its allocation target, Miyazono told reporters in Tokyo. The fund has a long-term investment timeframe much longer than 10-20 years, he said, adding that there will be no impact on pension payouts from a single year’s results.

Investments in ESG indices reached a record high of 5.7 trillion yen. The GPIF, a leader in socially responsible investing, has invested in indexes such as the FTSE Blossom Japan, MSCI Japan ESG Select Leaders and MSCI Japan Empowering Women.

During the January-March quarter, the MSCI All-Country World Index of global stocks slumped 22%, the worst since the global financial crisis. Yields on the 10-year U.S. Treasuries slumped 125 basis points to near record lows during the same period, fueled by unprecedented measures from the U.S. Federal Reserve and intense demand for haven assets.

From April, the GPIF has adjusted its portfolio, setting a general target to keep 25% each in all four asset classes, with the allocation of each assets allowed to deviate by different ranges.