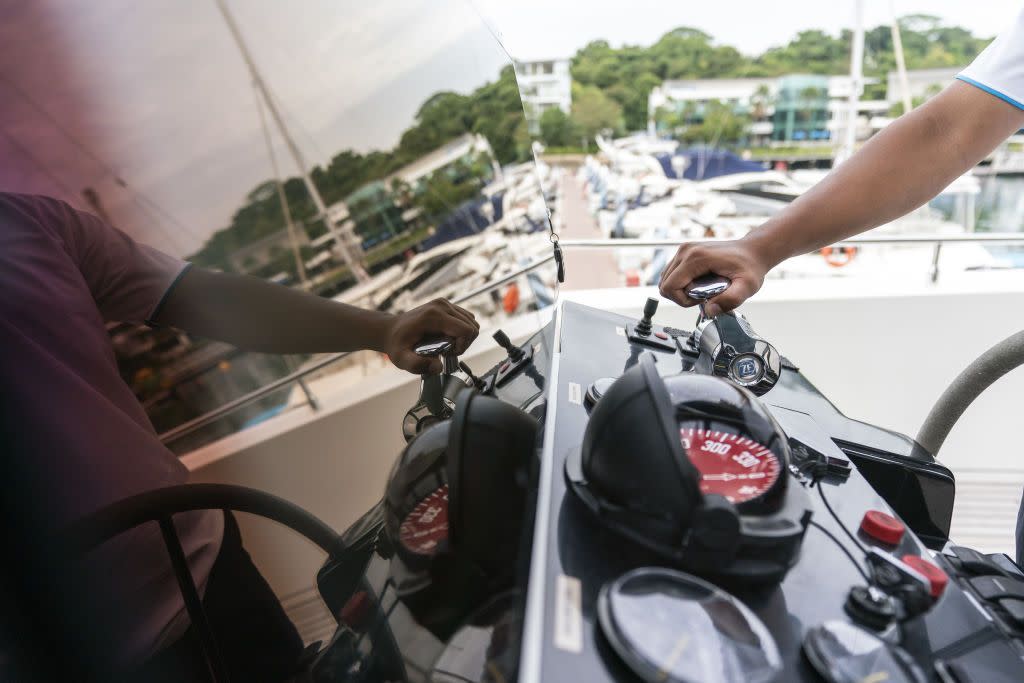 (Bloomberg Opinion) — How tight is Boeing Co. on cash? The planemaker is reportedly parting with a luxury mega-yacht it had kept around to wine and dine potential clients.

Boeing sold the 130-foot sea cruiser to an unidentified California property developer for $13 million, according to the Puget Sound Business Journal. The transaction moved quickly and skipped usual pre-purchase inspections, the business news site said. It’s just the latest in an accelerated dismantling of an American manufacturing powerhouse that just two years ago could seemingly do no wrong.

The aerospace giant continues to grapple with the fallout from the grounding of its top-selling 737 Max jet that has lasted more than 18 months following two fatal crashes and the dramatic plunge in air travel demand during the coronavirus pandemic. Fitch Ratings last week downgraded Boeing’s debt to BBB-, just one level above junk status, while maintaining a negative outlook. The credit-rating company cited expectations that air traffic won’t return to 2019 levels until the end of 2023; that timetable could put further pressure on production rates and hamper Boeing’s ability to clear out a glut of undelivered planes that are piling up in parking lots.

Early on in the pandemic, Boeing toyed with the prospect of a government bailout but ultimately chose to make its own way. That choice was made easier by the Federal Reserve’s aggressive corporate bond-buying program, which kept credit markets open for the company and other borrowers. But there’s no money coming in the door: Boeing burned through more than $5 billion of cash in the third quarter, bringing its year-to-date total to more than $15 billion. As of the end of September, it was sitting on more than $60 billion of debt.

Bond traders clearly see Boeing as a riskier proposition. The cost to insure its debt against default for five years is about 277 basis points, according to ICE Data Services. While that’s certainly better than the 651-basis-point high reached in late March, it compares with an average of just 30 basis points from the start of 2015 through 2019 for the company. By comparison, a five-year credit default swap on Expedia Group Inc., which also has ratings on the brink of junk, trades at 209 basis points, while Southwest Airlines Co., also rated in the triple-B tier, has five-year CDS trading at 136 basis points.

The cash squeeze has forced Boeing to continue adding to an already aggressive cost-cutting plan with new efforts to tighten up its operations and supply chain. That’s leading to more layoffs, with the company announcing in October that it will ultimately trim about 30,000 people from its workforce, a nearly 20% reduction.

Having already announced plans to consolidate work on its 787 Dreamliner in South Carolina and shutter a production line at the storied plant in Everett, Washington, Boeing is also weighing whether to divest the industrial park that houses its Seattle-area jetliner headquarters. This is part of a broader review of the company’s real estate holdings, with even the main Chicago offices being assessed, Chief Financial Officer Greg Smith told Bloomberg News. All in, the company expects to trim its office space by 30%. It reportedly has some 2.4 million square feet of office space and 124 million square feet of factories and warehouses.

Further underscoring the financial strain, Boeing said last month it would fund the company match for employee 401(k) plans with its own stock, rather than cash, for the foreseeable future.

With that all as the backdrop, the yacht clearly had to go, even though I suspect most Boeing investors are only hearing about the existence of this luxury ship for the first time this week. It’s a throwback to a corporate identity that quite simply no longer exists — Boeing can no longer shower money by the bucketful on its shareholders and would-be airline customers, and it no longer enjoys the kind of prestige that might justify a mega-yacht. Management finally seems to have realized that the Boeing of old is not coming back, so the sooner the legacy of its past excesses is addressed and dealt with, the better. The price tag of $13 million is pennies compared with Boeing’s debt obligations and cash burn, but every bit helps.

Fittingly, the Boeing yacht was named Daedalus. In Greek mythology, Daedalus is the father of Icarus and the maker of the wings his son used to fly too close to the sun. It’s quite the metaphor.

–With assistance from Brian Chappatta

This column does not necessarily reflect the opinion of the editorial board or Bloomberg LP and its owners.

For more articles like this, please visit us at bloomberg.com/opinion

Your next stimulus check just cleared a big hurdle — what’s the timing now?

‘If he dies, he dies’: Suspect in stabbing of Asian man in New York City told authorities

‘When the internet goes down the night raids start’: Inside the deadly phenomenon of web shutdowns

Ben Sasse on Matt Gaetz: ‘That guy is not an adult’

Your next stimulus check just cleared a big hurdle — what’s the timing now?

‘If he dies, he dies’: Suspect in stabbing of Asian man in New York City told authorities

‘When the internet goes down the night raids start’: Inside the deadly phenomenon of web shutdowns

Ben Sasse on Matt Gaetz: ‘That guy is not an adult’

Democrats decry Biden’s airstrikes in Syria as unconstitutional. Republicans praise them as ‘proportional.’