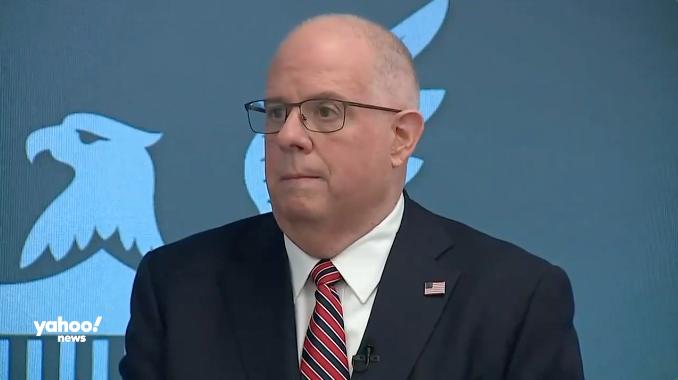 While speaking at the Ronald Reagan Institute on Monday, Maryland Gov. Larry Hogan discussed what he called the “exhausted majority” of Americans who he said are “fed up with politics” and feel ignored by politicians in Washington.

LARRY HOGAN: A large majority of Americans are thoroughly convinced that our political system is fundamentally broken, that we, as a people, are tragically divided, and that Washington is completely dysfunctional. Most of us are sick and tired of the angry, divisive politics. Americans believe in civility and pragmatism. They think straight talk is more valuable than empty rhetoric.

These are the things that my party is going to have to focus on if we want to win national elections again. Americans are not as divided as our politics and social media would suggest. The problem is not the American people. The problem is that politicians think the only way to get elected is to feed the extremes, to fire up the base, and that the only way to govern is through winner take all combat.

The extreme voices that dominate social media, cable news, and talk radio only represent a tiny sliver of Americans on the far left or the far right. Over 70% of the rest of us belong to the exhausted majority, people who are fed up with politics, who feel forgotten by both political parties and ignored by Washington. Most Americans want the same thing. They want humble, tolerant, respectful, and effective leaders, who will work together to find bipartisan, common sense solutions.

They want us to appreciate that no one of us has all the answers or all the power. They want a discourse that tolerates contrary views, among a diverse citizenry, without turning political adversaries into enemies or doubting their patriotism. They want a government that protects the vulnerable without dictating how we live our lives. They want a strong America that stands with its allies and for freedom in the world without taking for granted the sacrifices required for it. They want to stand together with their neighbors and feel proud of their country once again.

Biden told this immigrant rights activist ‘vote for Trump’ in a blunt exchange. He voted for Biden but is ready to push him hard on immigration reform.

House Passes China Delisting Bill, Sending to Trump for Approval. What That Means for Investors.

Column: Canceling student debt should be a slam dunk. Here’s why

Biden told this immigrant rights activist ‘vote for Trump’ in a blunt exchange. He voted for Biden but is ready to push him hard on immigration reform.

US Supreme Court asked to block Biden win in Pennsylvania