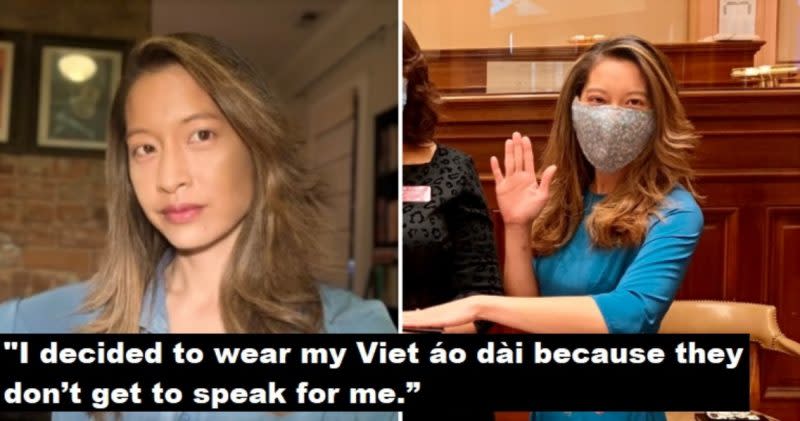 Bee Nguyen, Georgia’s first Vietnamese American state representative, donned an áo dài to her swearing-in ceremony on Tuesday. Regarded as the most popular national costume of Vietnam, the áo dài for women is a long dress with a contoured top that flows over loose-fitting trousers that reach the sole of the feet. Nguyen, 39, decided to wear the garment in response to the Capitol siege on Jan. 6, in which rioters carried the South Vietnamese flag. “When I saw the South Vietnamese flag flown during last week’s attempted coup, I felt deep anger and shame. I decided to wear my Viet áo dài to take the oath of office — because they don’t get to speak for me,” Nguyen tweeted. “While my family couldn’t be here, I’m grateful for my beloved colleagues.”

When I saw the South Vietnamese flag flown during last week’s attempted coup, I felt deep anger & shame. I decided to wear my Viet áo dài to take the oath of office — because they don’t get to speak for me. While my family couldn’t be here, I’m grateful for my beloved colleagues. pic.twitter.com/uW3haIOR9r

The South Vietnamese flag represented a pro-Western democratic republic that fought communist North Vietnam in the Vietnam War. Its latest use recalls the country’s “own ‘failed’ democracy” and the people’s “struggle to save their nation,” according to The Conversation. Nguyen is a daughter of war refugees, her father being a political prisoner of three years. Her parents resettled in Iowa in hopes of a peaceful life. “That framed my perspective in terms of what empowerment meant for my family,” Nguyen told NBC News last month. “It was important to me that I found a space where I could support other people who didn’t feel like they had a voice at the table.” In 2017, Nguyen became Georgia’s first Vietnamese American state representative (House District 89), according to the Atlanta Journal-Constitution. The post also made her the second Asian American Democrat in Georgia’s Legislature.

During my 1st full term, my dad & sister accompanied me on the House floor. Tomorrow, I will get sworn in without my family or friends — because of COVID + threats of violence. Many of us have decided to not bring our families. Republicans have failed us all. pic.twitter.com/1rqBTmca31

After winning her re-election bid in November, Nguyen was instrumental in disproving President Donald Trump’s claims of voter fraud in battleground Georgia. She scoured through public records and visited voters in question to verify their identities. In a hearing, Nguyen confronted a pro-Trump data analyst who came up with a list of “questionable” voters. She determined that at least 128 people — over 10% — in that list voted legally. Nguyen also condemned the Capitol invasion as soon as it happened. “Domestic terrorists are trying to overthrow our country. We knew all along that Trump was a danger to America — Republican leaders knew, too. And they let this happen. They continue to let it happen every day,” Nguyen tweeted. “Put your country first before it’s too late.” Feature Images via Bee Nguyen