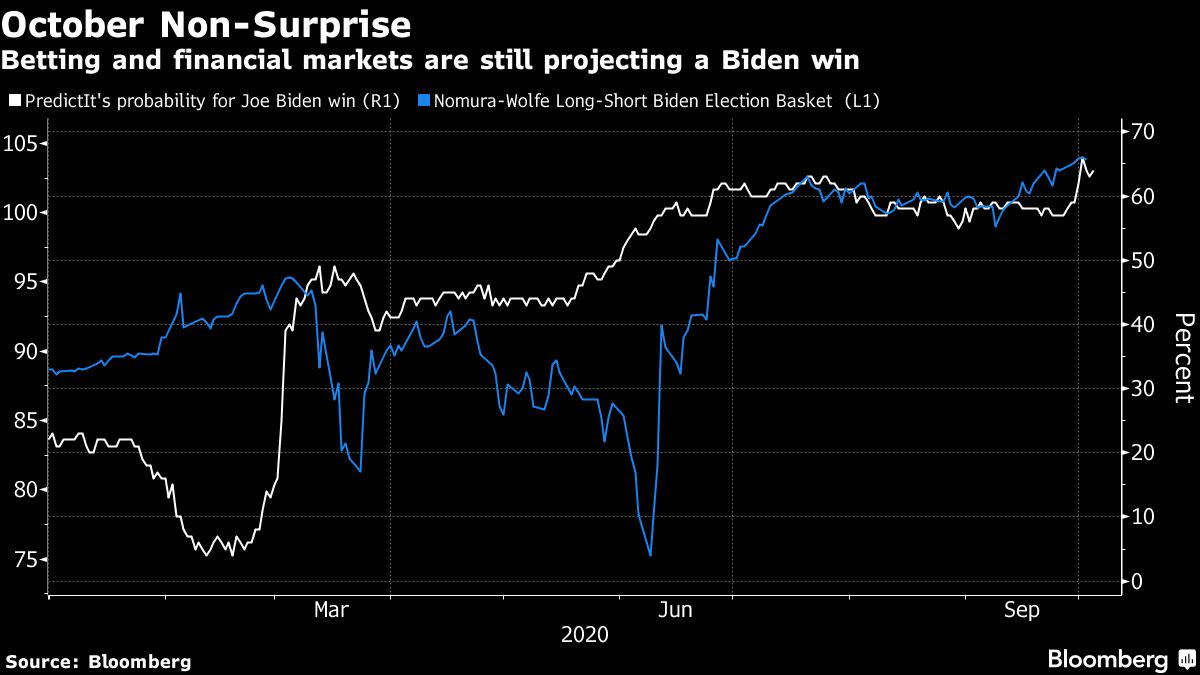 (Bloomberg) — With Joe Biden’s lead widening in the polls and President Donald Trump’s campaign sidelined by the virus, investment strategists now say there’s less of a chance for a contested election.

A clear-cut Democrat victory could avoid a long and messy legal battle and provide certainty to markets that have been nervous about election risks, according to strategists from Citigroup Inc. to JPMorgan Chase & Co.

The S&P 500 was up about 1% as of 9:32 a.m. in New York, havens including bonds are seeing little demand and the greenback is down.

“Polls are shifting from a close election and prolonged uncertainty to more a dominant Biden and clean succession,” said Peter Rosenstreich, head of market strategy at Swissquote Bank SA. “That is reducing uncertainty and increasing risk appetite.”

Cross-asset traders are taking the newsflow in their stride, despite confusion over the president’s condition and more positive tests from Republican leaders.

A poll released Sunday — taken between Tuesday’s debate and Friday’s news of the president’s infection — found that Biden’s national lead had leaped to 14 points, from 8 before the debate. Biden also has set two records for monthly fundraising in August and September, giving him enough money to dominate Trump on the airwaves.

“Markets seem have lowered the chance of prolonged uncertainty post-November 3,” Barclays Plc strategists Ajay Rajadhyaksha and Shawn Golhar wrote in a note Sunday. “Given that Vice President Biden has been ahead in most polls, this suggests that markets are assigning a bit more probability to his win and a bit less to a close and contested outcome.”

Barclays strategists point to a currency pair like the Aussie dollar versus the yen, a proxy for risk appetite. Its one-month implied volatility dropped to the lowest in weeks after the presidential debate. It has since rebounded, but remains below its 200-day average.

The bank’s dollar-neutral Biden currency basket has also risen in recent days, a sign of rising confidence in the former vice-president’s prospects.

The race is still closer in some of the states most needed to win the presidency. The unprecedented number of mail-in ballots being cast this year because of the pandemic means it likely won’t be possible in some battleground states to declare an unofficial winner on election night. Election officials say it could take days or even weeks in some cases to get a complete count, and a final determination could also be delayed by post-election lawsuits challenging the results.

Still, volatility markets have been pricing in risks from the election for months now, raising the bar for bad news to hit trading.

When it comes to futures tied to the Chicago Board Options Exchange Volatility Index, contracts for the coming three months are all trading above the one expiring in January, signaling investors are expecting wilder equity swings around the election.

But a weekend of confusion over Trump’s state of health has not deepened such anxieties. October’s contracts, which cover the polling date, are down 2% on Monday after jumping nearly 5% on Friday.

On the betting market PredictIt, the chance of a Biden win stands at 64%, a tiny drop from a peak of 66% the day before Trump’s positive test was announced. A long-short strategy betting on Biden’s triumph compiled by Nomura Holdings Inc. and Wolfe Research has hardly moved since reaching a record high on Thursday.

Treasuries fell on Monday, with yields on long-maturity bonds rising more than those at the short end. The difference between five- and 30-year rates increased to almost 124 basis points, the widest in more than a month, as investors pared holdings of havens.

That confidence, combined with a continued economic recovery, will help support equity markets — and potentially even a rotation into riskier shares, according to Evercore ISI.

“Passage of fiscal package 4 plus a Democratic sweep would be a significant support for value and cyclicals near term,” strategists led by Dennis Debusschere wrote in a note Sunday.

If Trump’s condition deteriorates, investors might start to wonder if the election could be postponed or who would run for the presidency in his place. Yet judging from financial markets’ reaction so far, that remains far from traders’ radar.

“Our baseline – of a risk-supportive macro outlook despite election uncertainty – will not change unless the president’s health unexpectedly takes a worse turn,” the Barclays strategists wrote.

At the same time, there is still no shortage of debate over whether Democratic or Republican policies would be better for investors. While some pundits say the former would raise taxes and tighten regulations in a blow to corporate profits, others point out a Democratic sweep could boost government and consumer spending to add a fresh leg to the risk cycle.

All told, between the disruption wrought by the pandemic and a volatile sitting president, a humdrum transfer of power is seen as providing investor solace.

“We do have sympathy with the idea that a clean election outcome is likely a positive event from here given the “chaos” risk overhanging markets,” strategists at Jefferies wrote in a note.

Brexit: How trade deal talks went from optimism to the brink

EU extends ban on Pakistan’s airline from flying to Europe

Will FuelCell Or Plug Power Stock Grow More By 2025?

3 Stocks That Could Make You Richer In December

Brexit: How trade deal talks went from optimism to the brink

EU extends ban on Pakistan’s airline from flying to Europe

Will FuelCell Or Plug Power Stock Grow More By 2025?

3 Stocks That Could Make You Richer In December

Biden asked Fauci to be his chief medical advisor, and Fauci said yes ‘on the spot’

Tesla Is Open To A Merger — And Daimler Would Be The Right Fit: Reuters

Where’s the stock market going next? Look at the 1960s for an answer, says a Fidelity strategist

Cramer Says This EV Startup Has The ‘Best Claim To Be The Son Of Tesla,’ Gives Blessing To Buy SPAC Stock