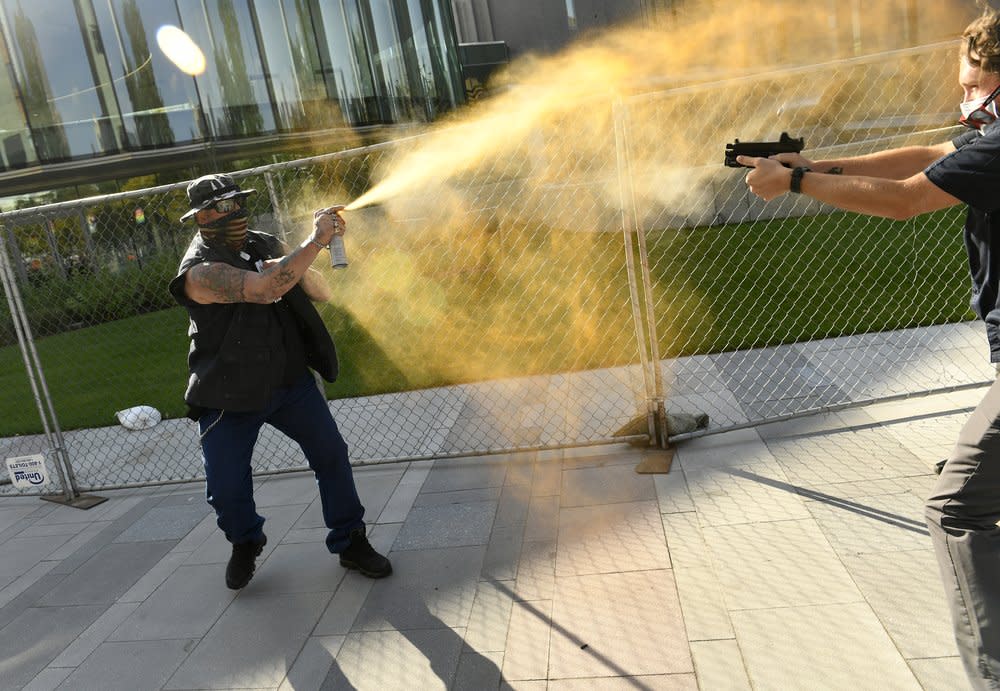 One person was killed Saturday in downtown Denver near dueling protests between far-right and far-left groups, but it was not immediately clear if the shooting was tied to either rally, police said.

The shooting occurred outside the Denver Art Museum after protests were winding down outside the nearby Civic Center, where a “Patriot Rally” competed with a Black Lives Matter-antifa “soup drive.”

At least one suspect was taken into custody and a homicide investigation remains ongoing, according to Denver police.

In an apparent effort to quash rumors, police tweeted that the security guard is not affiliated with antifascist protesters.

Denver Division Chief Joe Montoya said a “verbal altercation” preceded the shooting. Two guns and a canister of Mace were recovered from the scene, Montoya added.

“We don’t want any erroneous information going out, any speculation, because that’s really what hurts us, and that’s what gets everybody angry and motivated to commit more violence, and that’s what we’re trying to prevent,” Montoya said at a news conference.

“We had two groups with opposing views, and we know that can always get very tense, and there’s always the potential for violence,” he said, adding that police kept the two groups from approaching each other during the rallies.

Helen Richardson, the staff photographer at the Denver Post who captured the image of the shooting, called the incident “scary and terrifying” in an Instagram post.

“The entire thing lasted only a few seconds and happened right in front of me,” she wrote, adding that she was then taken into police custody to give testimony as an eye witness.

“This whole thing just saddens me beyond words,” she said. “I fear for what the weeks ahead hold for all of us.”

Cowboys for Trump leader arrested over US Capitol riot

Incoming Biden administration to migrant caravan: Don’t come, you won’t get in immediately

GOP Sen. Ben Sasse warns “QAnon is destroying” the Republican Party “from within”

Cowboys for Trump leader arrested over US Capitol riot

Incoming Biden administration to migrant caravan: Don’t come, you won’t get in immediately

These 3 “Strong Buy” Stocks Are Top Picks for 2021, Say Analysts

GOP Sen. Ben Sasse warns “QAnon is destroying” the Republican Party “from within”