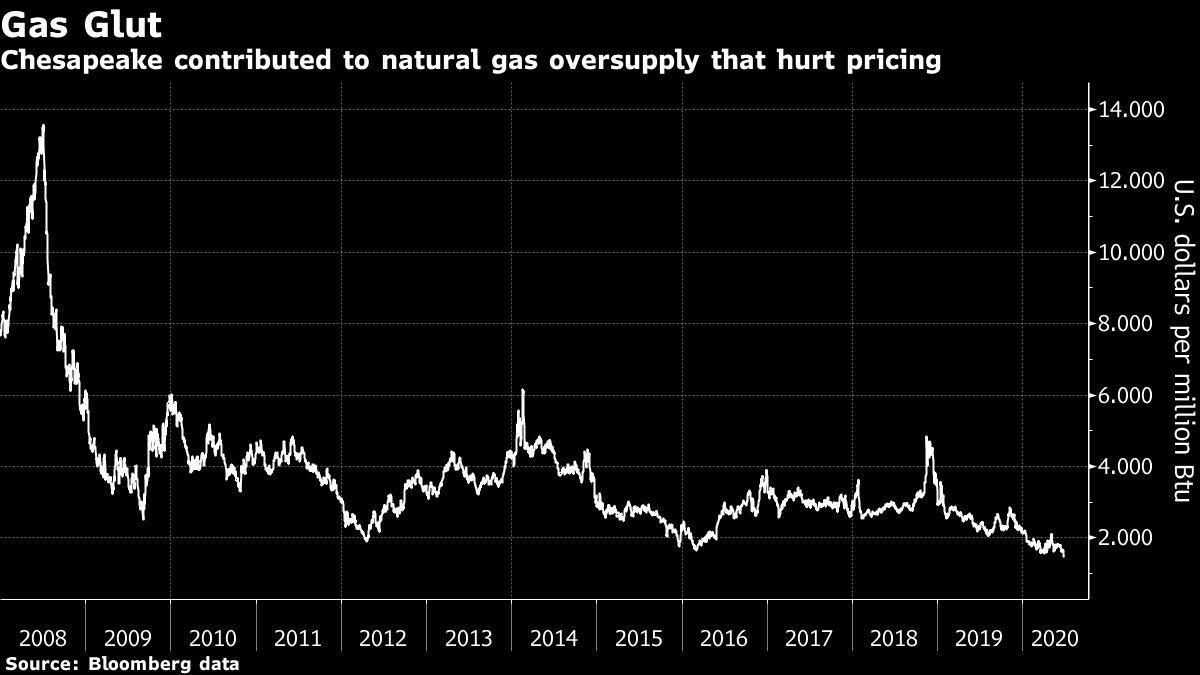 (Bloomberg) — Chesapeake Energy Corp., the archetype for America’s extraordinary shale-gas fortunes, filed for bankruptcy, becoming one of the biggest victims of a spectacular collapse in energy demand from the virus-induced global lockdown.

The Oklahoma City-based company filed for Chapter 11 protection from creditors in U.S. Bankruptcy Court in the Southern District of Texas on Sunday, listing assets and liabilities in the range of $10 billion and $50 billion, and more than 100,000 creditors.

The company also entered into an agreement to eliminate about $7 billion in debt and secure $925 million in debtor-in-possession financing.

“We are fundamentally resetting Chesapeake’s capital structure and business to address our legacy financial weaknesses and capitalize on our substantial operational strengths,” Chief Executive Officer Doug Lawler said in a statement.

Chesapeake is, to a certain extent, victim of the success both it and its peers had in extracting huge volumes of gas from previously hard-to-exploit shale basins. While that turned the U.S. into a global supplier of the fuel to rival any other, it also contributed to a glut that weighed on prices. Natural-gas futures in New York traded last week at a 25-year low.

But the gas market is only part of the story. Earlier in its history, under the direction of its late co-founder Aubrey McClendon, a colorful and outspoken advocate for the natural gas industry, Chesapeake expanded aggressively. The heavy debt load it acquired in the process was a burden it ultimately couldn’t shake off.

About a decade ago, Chesapeake was a $37.5 billion giant at the forefront of the fracking revolution that transformed the U.S. oil and gas industry. The company cut eye-popping checks to Fort Worth businesses and residents as inducements to drill on their land in the Barnett Shale of North Texas, America’s first shale field to hit the big time.

U.S. natural gas slumped after the 2008 financial crisis as the frackers overwhelmed demand, and prices still haven’t revisited their previous highs. Investors soured on Chesapeake, which by that point wasn’t only debt-laden but saddled with a real estate empire that included shopping centers, a church, and a grocery store. McClendon was ousted in 2013 and died in an auto accident three years later.

In subsequent years, management sought to compensate for the decline in its gas fortunes by shifting into oil exploration as fracking turned the U.S. into the world’s largest producer of crude as well as a major exporter. However, any optimism about that strategy evaporated with oil’s recent price collapse amid the Covid-19 pandemic.

Despite the company’s efforts over the years to address leverage and profitability, “the recent and dramatic drop in commodity prices and resulting tightening of the credit markets have frustrated the Debtors’ ability to further deleverage absent a chapter 11 proceeding,” Chief Financial Officer Domenic J. Dell’Osso said in a declaration in support of the bankruptcy filings.

Lawler took over Chesapeake in 2013 with an aim of reducing its debt load that was larger than Exxon Mobil Corp.’s, a company 29 times Chesapeake’s market value at the time. He had counted on capital spending cuts and asset sales to cover debt obligations. The company was in talks last year with Jerry Jones, the billionaire Dallas Cowboys owner, about a $1 billion sale of shale assets, but no deal resulted.

In May, Lawler was forced to discard his company’s full-year outlook and write down the value of $8.5 billion in assets as energy demand tumbled amid the Covid-19 lockdown. By then, the producer’s market value had dropped to less than $200 million. The company had about 2,300 employees at the end of last year.

“Despite having removed over $20 billion of leverage and financial commitments, we believe this restructuring is necessary for the long-term success and value creation of the business,” Lawler said Sunday.

The bankruptcy follows that of another highflier in the U.S. oil patch, Whiting Petroleum Corp., which filed for Chapter 11 at the start of April after championing what was once the premiere U.S. shale field, the Bakken of North Dakota.